Anniversary of the end of Sputnik 1

Happy 2023 to everyone. I notice that I did not blog once in December. I am not planning to stop, but my pace has certainly languished. I will probably not return to the biweekly pace I tended to keep for much of the last couple of years. No resolutions here, but we will see what the New Year brings.

I was looking for a historical event to post on the right sidebar, and it turns out today is the 65th anniversary of the death of Sputnik 1, first satellite into space, launched as intended during the International Geophysical Year. In a previous post I noted the anniversary of Sputnik 1's launch on Oct 4, 1957, three months into the IGY. Another post filled in additional technical details of the mission. Three months later, on Jan. 4, 1958, after 1,440 orbits each lasting 90 minutes, the satellite burned up as it re-entered the Earth's atmosphere.

Here is a cute video on how satellites stay in orbit, and why their orbits eventually decay.

By the way, the European Space agency defines low Earth orbit (LEO), where atmospheric drag degrades satellite orbits, as an elevation of less than 1,000 km above the Earth's surface. Sputnik 1's orbital elevation ranged from 215 km at perigee to 939 km at apogee, so it qualified as being in LEO.

Forbes.com actually posted an article in 2018, This Is Why Sputnik Crashed Back To Earth After Only 3 Months, by Ethan Siegel. It states that even though Sputnik's orbit was above the so-called Kármán line, hence in outer space, "Such disaster [of a satellite's demise] is inevitable due to satellite drag, which is a way to quantify how much speed a satellite loses over time due to the atmospheric particles it runs into at high relative speeds. Any satellite in low-Earth orbit will have a lifespan ranging from a few months up to a few decades, but no longer than that."

I came across an interesting web site, the Index of Objects Launched into Outer Space (including Earth satellites) from the United Nations Office for Outer Space Affairs. I could not seem to sort the table, but using the filter by launch year, I was able to obtain and graph (I love making graphs!) the number of launches by year, starting with the first two Sputnik launches in 1958 (see graph below). There are currently 10,100 still in orbit, and 4,176 objects not in orbit. After averaging 131 launches/year from 1965-2015, the number of launches has started going up exponentially, due to the Starlink program of SpaceX, which plans to deploy nearly 12,000 microsatellites to provide Internet access coverage to 45 countries and global mobile phone service.

My editor pointed out that one of her favorite podcasts, Planet Money, had  a series, Planet Money Goes To Space, about the relative ease of getting a satellite into space these days.
We've come a long way since that 3-month lifetime of Sputnik 1!
at 8:51:00 PM 1 comment:
Email ThisBlogThis!Share to TwitterShare to FacebookShare to Pinterest
Labels: IGY, International Geophysical Year, satellites and space, space

Powers of Ten and Cosmic View

Powers of Ten is a short film made by the designer team of Charles and Ray Eames to illustrate the vast scale of the universe, from the outermost galaxies to the innermost nucleus of an atom, with human scale approximately in the middle. Starting from a look at picnickers on the shore of Lake Michigan, the scene zooms out by a factor of 10 every 10 seconds, from a scale of 1 meter (100) to a scale of 1024 meters. Then it zooms back to the picnic, and then inwards by a factor of 10 every 10 seconds until it reaches the nuclear scale of
10-16 meters.

I saw a black-and-white predecessor of this film in my first-year physics course at Cornell in 1968, titled A Rough Sketch for a Proposed Film Dealing With the Powers of Ten. I was kind of blown away by it.

The best version of this film is this finished version of the Rough Sketch, now simply titled Powers of Ten, from 1977. The narration was by noted physicist and public intellectual Philip Morrison.

Other takes on the same theme include this 1996 version, also titled Powers of Ten, an IMAX film narrated by the omnipresent Morgan Freeman, starting on St. Mark's Square, Venice,

and this 1968 animated Cosmic Zoom from the National Film Board of Canada:

This year I learned that these films emanate from a concept by Kees Boeke, as illustrated in his 1957 book, Cosmic View. Boeke, a Dutch reformist educator, Quaker missionary and pacifist, seems to have been a very interesting and committed individual. His idea for the scale of the universe theme was acknowledged in a couple of the films above.

You can see the pages of the Boeke's book Cosmic View at this website. Just as the Powers of Ten film was narrated by physicist Philip Morrison, this book includes an introduction by Nobel prize winner Arthur Compton.

Is it coincidental that this book was published during the International Geophysical Year? At the dawn of the space age, I think that people had an increasing awareness and wonder at the scales of the universe, and it was certainly a challenge for educators to represent this.

I have a couple of Eames souvenirs. There is a flipbook of Powers of Ten: 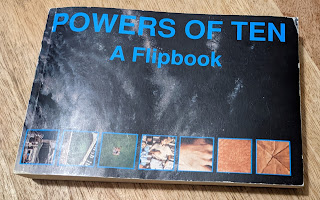 Then there is our Eames lounge chair and ottoman. It is an iconic piece of mid-century (20th) furniture, first released in 1956, just before the IGY. About 10 years ago, we bought this one, and despite needing a repair due to a design flaw with the aging epoxy, it suits us fine. The seller told us that our chair once belonged to 1984 VP candidate Geraldine Ferraro, although there is no proof of that.

And finally, the philatelic items. I have the 2008 sheet of 16 commemorative stamps showcasing the important contributions  of Charles and Ray Eames to American design. The Eames lounge chair is shown in one of the stamps., top row, second from left.

And I have a first day cover with the stamp of the chair and a corresponding cachet.

The place of issue for these stamps was Santa Monica, California, where the Eames's had a house and studio. In 2014, I visited this Eames House in Santa Monica Canyon on a field trip outing during the International Symposium on Archaeometry held at the Getty Museum and UCLA in Los Angeles.

In the very first post for this blog, I mentioned that I had been inspired to start it by the story of Julie Powell. I had just watched the movie Julie and Julia (2009), contrasting the early years of Julia Childs' culinary career with the life of Julie Powell, who aspired to cook all 524 recipes in Child's cookbook Mastering the Art of French Cooking (1961) in 365 days, an endeavor she described in a blog. I thought afterwards that a blog of my own could be a good way to present some of my thoughts about the IGY and my collection.

Then I said: "If I do one entry a week (and stay with it!!), I can get 524 blog entries done before the diamond (75th) anniversary of the IGY in 2032-33!" I've now done 113 posts in two years, or just about one a week, so I am on target for my more modest pace, although recently I have slowed down considerably. My efforts have left me even more impressed with the blogging (not to mention cooking) task that Julie Powell set for herself, and at which she succeeded.

Sadly she has died at the age of 49. She kept writing, but never quite matched the success of her blog and resulting book, Julie & Julia: 365 Days, 524 Recipes, 1 Tiny Apartment Kitchen.

Author Julie Powell attends the premiere of Julie & Julia at The Ziegfeld Theatre in New York, on July 30, 2009 (Peter Kramer/AP)
According to this Daily Meal webpage, one of the 25 best selling cookbooks of all time, Julia Child's cookbook (with co-authors Louisette Bertholle and Simone Beck), Mastering the Art of French Cooking (1961), was published not long after the IGY, selling about 1.5 million copies. The two cookbooks on the list published before and closest to the beginning of the IGY were Betty Crocker's Cookbook (1950, 65 million), and the Better Homes and Gardens New Junior Cookbook (1955, 2.6 million). Ahh, makes me think of fish sticks and jello mold!
at 5:50:00 PM No comments:
Email ThisBlogThis!Share to TwitterShare to FacebookShare to Pinterest
Labels: 1950s, culture
Older Posts Home
Subscribe to: Posts (Atom)

Subscribing to this blog

Blogger seems to have removed the ability for you to subscribe to automatically get automated notifications of each blog post. I am happy to send include you on an email list announcing new posts. Just let me know if you are interested.

What was the IGY?

"The International Geophysical Year (IGY) was perhaps the most ambitious and at the same time the most successful cooperative enterprise ever undertaken by man. The IGY was a scientific year. It was a year when men [sic] of sixty-seven nations agreed to observe the earth over its whole surface, simultaneously, and with precise instruments designed to the same standards so that the changing phenomena enveloping the earth could be caught and described in their full global sense."
Lloyd Berkner, President, International Council of Scientific Unions; Forward to IGY: The Year of the New Moons (1961).

On or about this day during the IGY (www.eventshistory.com/)

Rob Sternberg
Born in 1950, I'm a child of the International Geophysical Year. My education was shaped by the fervor for science following the launch of Sputnik. I have a Ph.D. in geophysics, and was a professor at Franklin & Marshall College for over 30 years. Contact me: rssternberg@gmail.com